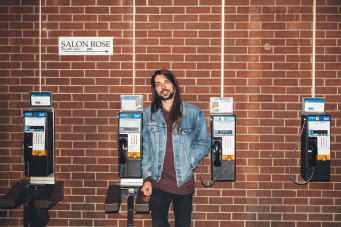 Using rough and lively lyrics, Dave Chose illuminates the poetry of everyday, ordinary life. His authenticity shines on stage as he performs his daring folk-grunge music in a way that is both sensitive and powerful.

Dave Chose, formerly member of the now-dissolved folk-punk trio Faudrait faire la vaisselle, has been working as a solo artist since 2016, with the help of members from Galaxie and PONI. The Montrealer (via Lac-St-Jean) and competitor in the 21st Francouvertes released his critically acclaimed debut album via Bonsound in 2018. The songs combine his folk-based music with sprawling, grimey guitar fuzz and his own crass, vibrant lyrics.

Dave Chose breathes life into his music with a verbose vocabulary from everywhere between his hometown of L’Ascension-De-Notre-Seigneur and the Montreal neighbourhood Hochelaga-Maisonneuve. His lyrics tell stories about common events, giving them an urban sensibility and making them extraordinary. The singer-songwriter vouches for the magnificently mundane, celebrating both the taste of iced tea from the corner store and the pleasure of rolling his own cigarettes.