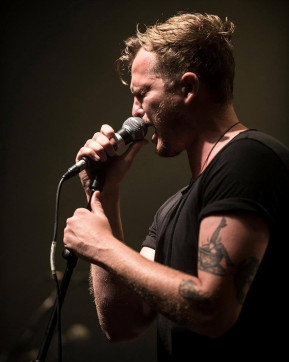 Originally from Retford, a small town in the heart of England, Sam Tucker has been living in Quebec for the last three years. Discovered on the 5th season of La Voix, Sam Tucker caused quite a sensation with his blind audition. His first EP Aye Avast has been released on September 28, 2018.

Born in Retford, England, Sam Tucker began playing the guitar in his adolescence.

After studying for a degree in linguistics he landed in Gaspésie to complete a French immersion internship. There he fell in love with both the region and the province. Setting up shop in Gaspé, he began working on his own compositions and performed them in local bars, along with covers of his favourite folk songs.

In the summer of 2014, he explored the United States, driving from Chicago to San Francisco and soaking up inspiration for his song writing.

In 2017, Sam Tucker wows the judges of The Voice during his blind audition, playing The Reckoning Song, by Asaf Avidan. He joined up with Pierre Lapointe’s team, where he went on until the semi-finals, before leaving the show having gained much experience.

Audiogram offered him a record deal and he soon found himself in the studio recording the tracks of his first EP, supported by the producer Rob Heaney (Franklin Electric, Patrick Watson), Joe Grass (guitar), Mishka Stein (bass), and Robbie Kuster (drums).

Months later he released an EP comprised of six songs grounded in the sounds of roots, folk, rock et blues. His song, California Queen, went on to reach the number one spot on the anglophone correspondent radio charts.

Since the summer of 2018 the now Montréal based artist has been continually adding to a long list of shows, which started with the Montreal International Jazz Festival, Sherblues & Folk Festival, and the Quebec City Summer Festival. His tour has so far spread across much of the province, always backed up by his trusty companions, François Plante (bass), Simon “Beau-Léger” Pedneault (guitar), and Samuel Joly (drums).

Sam Tucker is working on his next album produced by Jesse Mac Cormack. A new single will be released beginning of winter 2020 followed by a new album and tour dates.