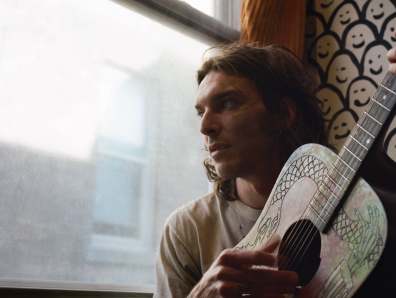 Paul Jacobs has joined Bonsound‘s show production agency. The team is very pleased to welcome the Montreal-based artist to their roster, after the release of his album via Blow The Fuse Records. The critically acclaimed Pink Dogs on the Green Grass is a deeply intimate record that examines Paul Jacobs’ experiences using music inspired by folk, pop, psych, and rock. The collection of 13 tracks are as timeless as they are modern. From emotionally charged melodies and offbeat, electric jams, to pop-folk ballads and powerful synth rock'n'roll anthems, Jacobs truly creates a world of his own.

Pink Dogs on the Green Grass is available everywhere: blowthefuse.ffm.to/pdotgg

About Paul Jacobs ** Since arriving in Montreal, **Paul Jacobs has built a solid reputation as one of the most prolific and eccentric artists in town, both as a drummer for Pottery and as the leader of his own five-piece band. His sounds are composed of hooks and rhythms reminiscent of classic rock legends like The Byrds, Fleetwood Mac and Neil Young. He follows an unconventional style of songwriting and production that echoes artists like Arthur Russell, Kurt Vile and Daniel Johnston. Combining his passion for visual art and music, Paul Jacobs embodies the modern version of the Renaissance man and pushes boundaries with his timeless compositions.