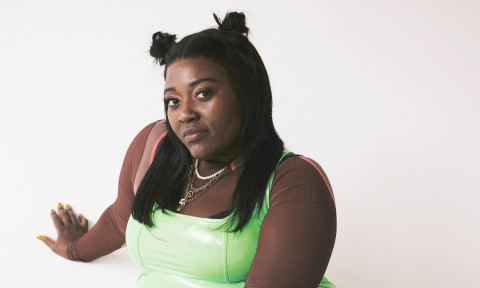 Bonsound is thrilled to announce Täbï Yösha's signature to its label and publishing rosters. The Montreal-based singer of Haitian origin will introduce her neo-soul infused R&B on her first EP to be released in 2023.

Trained in singing, theater and dance, Täbï quickly started performing as a member of The Souldiers, a jazz/house band with which she played numerous shows. Her talent and stage presence also brought her to the forefront as a solo artist, notably at Femmes en blues, an event that showcases female musicians and singers from the Quebec scene, and at the Sugar Bar in New York City, a venue founded by Ashford & Simpson, the legendary songwriting couple behind some of Marvin Gaye's, Chaka Khan's, and Aretha Franklin's greatest hits. She then went on to lend her voice to Ariane Moffatt’s Aquanaute 2022, which was nominated at this year's Gala de l’ADISQ.

In January 2020, Täbï Yösha released All Day All Night, a sultry and sensual R&B track. Move On, a francophone neo-soul song, followed in September. The impromptu performances she would post on Instagram quickly caught the attention of beatmaker Suiker, who sent her some instrumentals that soon convinced her to put her voice and songwriting skills to work. From this collaboration are born the songs that will be assembled into a first EP to be released next year.