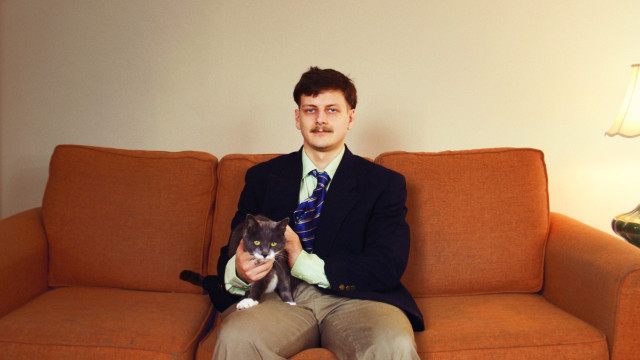 One year after having propelled his clever compositions beyond the Acadian borders with his debut album Greatest Hits Vol.1, P'tit Belliveau now unveils ... chante Baptiste. This new EP is a collection of cover songs originally by cult DIY country singer Baptiste Comeau, also from Baie Sainte-Marie in Nova Scotia. Although it is rooted in a distinctive soundscape unique to the young Acadian musician, … chante Baptiste is a gateway to the repertoire of his idol, whose songs are not available online to this day. The EP is out now digitally and on cassette tape.

Among the EP’s seven songs, all recorded at home by Jonah Guimond (aka P’tit Belliveau) during the lockdown, is the seminal track Les Earwigs, which alone exemplifies the little-known work of Comeau; always funny, true, light, imaginative and ingenious. Paying a cartoony homage to the insect, portrayed here as a charming and party-going character, the song is driven by the characteristic amalgam of bluegrass and indie pop which defines P'tit Belliveau’s sound.

Watch and share the art tracks from … chante Baptiste via YouTube.
The EP is available now on cassette tape and on all music services.

As a kid, P'tit Belliveau discovered Baptiste Comeau on the airwaves of 104.1 CIFA, a community radio station, which he thought was a channel just like any other. This meant to him that Baptiste, therefore, was as much of a rockstar as the artists broadcasted on commercial radio. Since then, Baptiste Comeau has become one of the prime influences on his music, both for the resourceful aspect of the compositions (immediate, rudimentary, supported by a drum-machine) and the witty lyrics that depict the simple things of everyday life with humor, sensibility and authenticity. It was only natural for the Acadian musician to pay tribute to Comeau, covering songs that were adaptable via his own style, while keeping it all in sync with the sounds and DIY ways of his idol. P’tit Belliveau’s intention with this collection of covers is to share the artistry with his own audience, in the hopes that Baptiste is never forgotten.