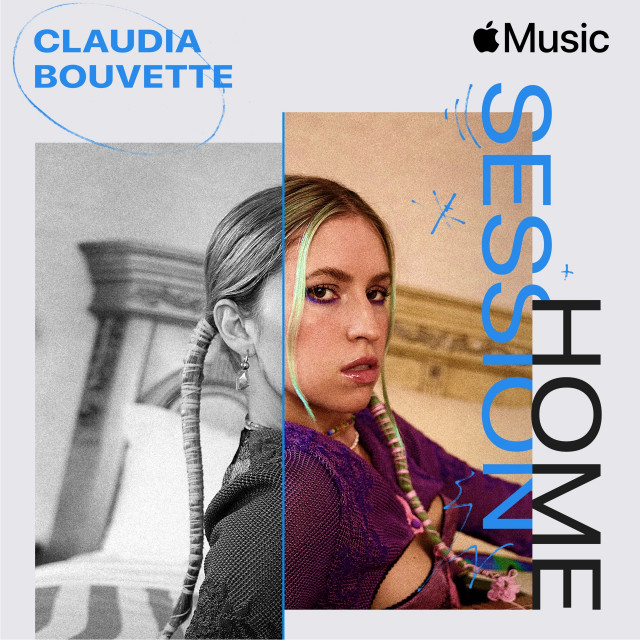 Today, Montreal-based singer-songwriter Claudia Bouvette presents three songs as part of an Apple Music Home Session. This intimate, stripped-down project recorded and produced entirely at home features new versions of two of her songs, Touchée-Coulée and Flowers, as well as a cover of Simple Plan's I'm Just a Kid. All three songs are available exclusively on Apple Music.

Less than a year after releasing her first album The Paradise Club, Claudia Bouvette now returns with completely different versions of Flowers and Touchée-Coulée, both taking a more refined form. The original electronic instrumentation of Touchée-Coulée is replaced by heavy guitars and a languid tempo: I felt like it was a song that was meant to be played a little more punk rock. I went back to the basics for this version, in the most simplistic and stripped-down way. To me, it gives a whole new meaning to the song. The track Flowers, which is sparkling and energetic on the album, is transformed into a haunting, ethereal ballad, putting to the fore all the tenderness of Claudia's voice.

These two new versions are accompanied by a cover of Simple Plan's hit I'm Just a Kid, also recorded and produced between her bedroom and that of her friend Tommy Lunaire. Claudia transforms this 2000's pop punk anthem into a sweet ballad carried by her acoustic guitar and delicate voice. She chose this song for its nostalgic value: I'm Just a Kid was a really important part of my youth. I've listened to it easily thousands of times, and it makes me revisit and relive emotions from that period, like a kind of positive nostalgia that transports us to the early 2000s.

After performing the hits from her latest album at Santa Teresa, the FEQ, OSHEAGA, Pride Montreal’s SuXession show, and various other events this summer, Claudia Bouvette will make an appearance at the Festival des Montgolfières de Gatineau in September. Later, she will join Tyler Shaw as his supporting act for his tour dates in Ontario and as a co-headliner in Montreal on November 18th, 2022. See the list below for all the dates.