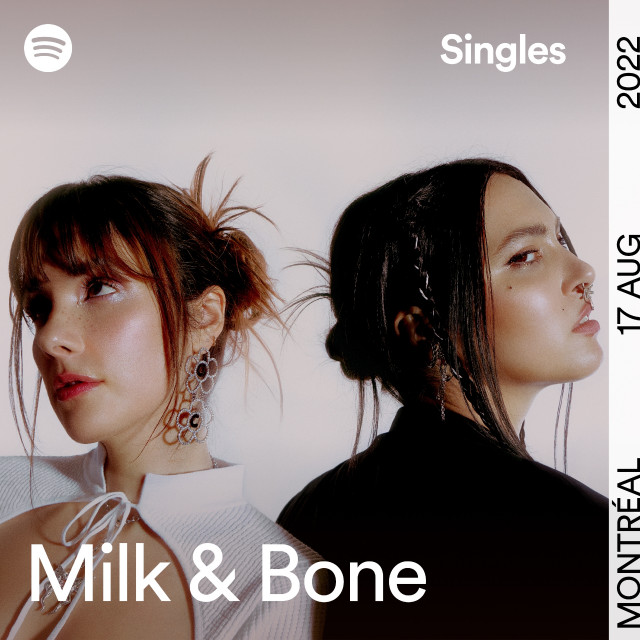 Today, Montreal-based electro-pop duo Milk & Bone releases a cover of Pomme’s On brûlera, their first recording in French, along with a stripped-down version of their recent hit Bigger Love as part of the Spotify Singles series.

The pair formed by Laurence Lafond-Beaulne and Camille Poliquin wanted to create a slower, more intimate version of Bigger Love. We opted for a trip hop sound that we think is very melancholic, explains the duo. This relaxed pace better conveys the feelings of introspection and heartache evoked through the lyrics while also leaving more room for the song’s original harmonies to shine.

Along with this new version of Bigger Love, Milk & Bone presents a cover of Pomme’s On brûlera, which is their first time recording an entire song together in French. The duo chose this song in particular because of its beautiful lyrics and melody, the latter being something they wanted to keep from the original song: We wanted to make it our own with the harmonies, but keep the melody intact because it's so beautiful and powerful. We played with layers of synths and texture, which is what we love to do in our music. It’s the part we love the most about this version, it brings the song somewhere else. Their interpretation is just as delicate as the original, but its addition of synthesized textures gives it an otherworldly atmosphere that fits seamlessly with their new, dreamier version of Bigger Love.

Chrysalism, Milk & Bone’s third studio album, will be released on October 28th, 2022 via Bonsound. With enthralling vocal harmonies, synth-led music and melodic guitar riffs, the pair explores topics such as love, longing and heartbreak from a decidedly more mature perspective, choosing to see themselves as actors in the storyline of their love lives. The album was composed and recorded alongside Micah Jasper (ELIO, Rebecca Black, Slayyyter), a Los Angeles-based producer and friend of the duo who shares their pop sensibilities and references. Chrysalism is a poignant reflection of what it feels like to grow older and come into your own.