Philippe B presents a video for Autoportrait (sans lunettes)

Philippe B & The Alphabet: a unique concert at Coup de coeur francophone

Philippe B presents a video for Je t’aime, je t’aime

Philippe B: his album is out now

Philippe B announces the release of La grande nuit vidéo

Philippe B presents a video for his song Ornithologie I

Félix awards for Philippe B and Bonsound

Ornithologie, la nuit by Philippe B out now!

Philippe B announces the release of his new album, Ornithologie, la nuit 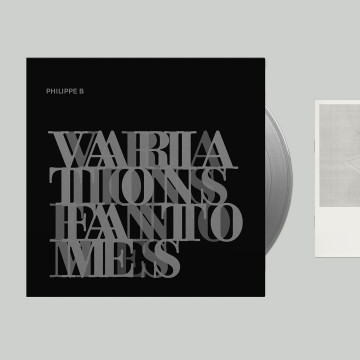 10 years to the day since the release of Philippe B's emblematic album Variations fantômes, Bonsound is celebrating its anniversary with a special reissue on vinyl. A new silkscreened jacket and a risograph-printed booklet with new material will also be included with the silver limited edition vinyl. This exclusive release will be available as of Monday, May 3rd at participating independent record stores, and can be pre-ordered through Bonsound's online store now.

Initially launched on May 3rd, 2011, Variations fantômes is inspired by classical music themes from Ravel, Strauss, Schubert and Vivaldi, to name a few. Following the exploration, introspection and reinterpretation of the works of these artists, Philippe B was guided by beauty, melancholy, faith, love and death when writing the lyrics of the very personal pieces that make the album. With his unique way of stringing words together to create vivid imagery, the singer-songwriter tells stories filled with passion, remorse and torment. His modern, intense folk music and intriguing ambience accompanies his poetic lyrics, which sets him apart from his peers. The result is a harmonious amalgamation of guitars, keyboards and violins integral to Philippe B's distinct musical universe.

Variations fantômes is available on all music services.

Variations fantômes has been acclaimed by several publications and critics, in addition to finding its way to the top of multiple charts since its release. In 2011, the album ranked first and third on the year-end lists of best Quebec albums by Le Devoir (Philippe Papineau) and La Presse respectively, while Voir placed it at the top of their list of albums to listen to while reading the lyrics. The album continues to leave its mark on the cultural landscape long after its release, as CISM named Variations fantômes album of the decade in 2019. It was also included in La Presse's best albums of the mid-decade list in 2015 (Alain Brunet), as well as in the top 25 best Quebec albums released since 1990 published by Le Journal de Montréal in 2016.